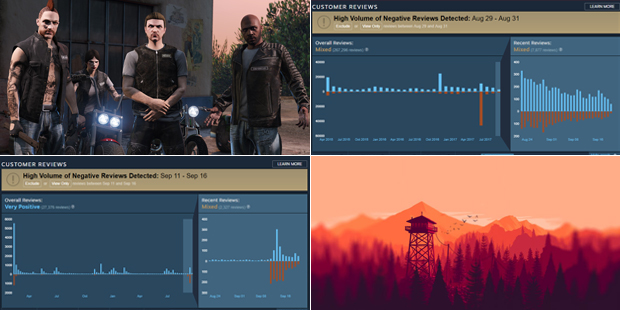 All social problems can be solved by data, any naive tech company can tell you, which is why Valve are attempting to solve Steam ‘review bombing’ by adding graphs to its player reviews. Review bombing is the practice of players organising to leave negative reviews that drive down a game’s rating in an attempt to punish or manipulate developers by damaging their future sales prospects. Games bombed over the past month range from Firewatch to Grand Theft Auto V. This is a known and old problem with Steam’s reviews, and one Valve aren’t happy with. So, to counterattack disproportionate bursts of negative reviews, Valve have added unusual activity warnings to Steam store pages with histograms tracking reviews over time.

“On the one hand, the players doing the bombing are fulfilling the goal of User Reviews – they’re voicing their opinion as to why other people shouldn’t buy the game. But one thing we’ve noticed is that the issue players are concerned about can often be outside the game itself. It might be that they’re unhappy with something the developer has said online, or about choices the developer has made in the Steam version of their game relative to other platforms, or simply that they don’t like the developer’s political convictions. Many of these out-of-game issues aren’t very relevant when it comes to the value of the game itself, but some of them are real reasons why a player may be unhappy with their purchase.”